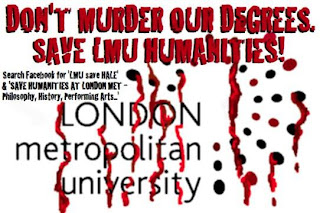 DEFEND the ARTS and HUMANITIES brings more woeful tidings of attacks on arts and humanities in the UK higher education sector, this time threatening courses, staff and students of Philosophy, History and Performing Arts at London Metropolitan University. Campaign links are given below, together with a summary of what has been going on at LMU by academics in Philosophy there.

A meeting of London Metropolitan University’s Academic Board yesterday [] approved proposals for the closure of Philosophy, along with its fellow Humanities subjects, History and Performing Arts – that is to say, it decided that they will not recruit from 2012/2013. This decision was extremely sudden. Until Tuesday evening of this week, when colleagues on Academic Board received papers for the coming meeting, it seemed that these courses were to be preserved. This was not the decision of the Faculty, which proposed to continue these courses, but of central management.
The ground for the decision was ostensibly that of prospective profitability. However, neither Faculty nor central management have been willing to divulge the figures or the modelling methods used to reach this decision. Crude calculations on the basis of existing student numbers suggest that the University actually will lose more income than can be possibly saved in redundancies. This supposition is supported by the fact that when asked at the sub-committee of the Board of Governors meeting last night how much the cuts were expected to save, the Director of Finance replied that they had not yet made that calculation.
Philosophy has been taught at LMU and its predecessor institutions (the University and Polytechnic of North London) since the 1960’s, and has offered a Single Honours degree since 1973. Since the 1980’s, the course has been distinguished by the fact that it provides equal coverage of both Analytic and European philosophy. Although it is now smaller than in the ‘80’s and ‘90’s, it still maintains this breadth of coverage.
Philosophy is extremely popular among its students and in last year’s Guardian student satisfaction survey came 29th out of 47 – far higher than the University overall.
The decision to close History and Performing Arts is just as shocking as the decision to close Philosophy. History also achieves a far better than average satisfaction ranking – 48th out of 93, and Performing Arts is widely regarded as providing training at least as good as the Royal Colleges. The cutting of these three courses, following the decisions made earlier this year to close several other Humanities courses, leaves only a small rump of surviving courses, which will almost certainly be absorbed into other Faculties. It therefore seem likely that LMU will in a very few years be a University without Humanities. This is therefore another instance of that alarming trend, whereby, not only philosophy, but also other Humanities courses are deemed inappropriate for students in the post-1992 Universities.
It is still possible that pressure from inside and outside the University will prompt reconsideration of this decision. If you wish to register a protest, please email:
With thanks in advance for your support,
Jim Grant, Course Leader
Dr Adam Beck, Senior Lecturer
Dr Chris Ryan, Senior Lecturer

Posted by Catherine Grant at 10:43 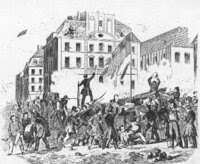